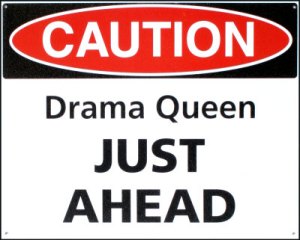 The other day Bliss Windlow (no relation to Clover; just happens to share a surname) said some words that really resonated with me. She said that as a child she would get in trouble a lot for being bossy and acting like a know-it-all. Boy that was me all over. She concluded that because of this, she was born to make instructive blog posts. I can only make the same conclusion.

Today, I’m going to lecture you on drama. People really really hate drama. It’s really sad to see, that the more people seem to talk about how much they hate drama, the more seems to somehow come into their lives. So in the interest of looking out for you, yes, you specifically, I’m going to show you six simple ways to have less drama in your virtual (and probably also physical) world. Ready? Here we go.

Call me old-fashioned, but I can’t stand the Facebook culture. Everybody having to share every single personal detail of their lives with the entire (semi)literate world seems to have done away with our sense of private dignity. I realize I’ve officially just become old by saying that. So let me do this shit right.

“Back in my day, if someone had some personal problem, they’d talk to a close friend or trusted confidante. They wouldn’t just post it on the intertubes or whatever-the-hell-you-call-em for everybody and his dog to read. If we had some personal info on someone else, we’d whisper it over the fence or the clothesline. We called it ‘gossip’. That was the way it was and we liked it. We would have phrases like, ‘That’s for me to know and you to find out,’ or, ‘Why? None of your god damned business, that’s why!’.”

Right, so what I’m saying in my very rambling way is, the world really doesn’t need to know the details of why the wedding’s off, the group’s policy is changing, the prim baby is going back into inventory, you can’t come to work tonight, your band had to cancel its gig. We don’t need to read the break-up note. We don’t need to hear what he said and she said. We don’t need to hear names, scandalously fun though it may be. It’s really enough for us to hear “The wedding’s off”, “The group’s policy is changing to x“, “What prim baby?”, “I have to call out tonight,” or “We’re sorry but we have to cancel our gig.” That said, I understand that there’s very real emotions involved and you want to hash out what a jerkface your boss is. But that’s what friends and private conversation are for. Which brings me to number 2:
END_OF_DOCUMENT_TOKEN_TO_BE_REPLACED

So I’ve started the Lionheart Times back up a week or two ago. It was a great idea until I remembered I’m never around to be at any of the newsworthy events. Howdy Neighbor day? I bet it was great. Wouldn’t know. Town Meeting? Haven’t been able to attend one in months. Live performance in town? Heard it was awesome. SL8B’s opening? Not only am I not available to log on because I was called in to work, but even if I were around, my rural net connection combined with the multitudinous hordes of avatars make it a one-way ticket to Crashville.

It would be really really really REALLY cool if people would volunteer to cover things like this and send in write-ups and/or photographs so that I could be the editor instead of the reporter. But then again it would be cool if people did lots of things differently. You know, world peace and all that good shit. It would be really cool if Johnny Depp would knock on my door. But I ain’t holding my breath on any of the above coming to pass anytime soon.

However, I am going to start getting the Best of Lionheart together so people can start with the voting. So there’s that.

All right, so I promised I’d write a blog on my ideas and opinions about repairing/rebirthing/re-instituting a healthy community. To preface, I’m no kind of expert. I have no degree or credentials; just my own experiences from which I hope I’ve learned something.

If your community is languishing, growing slowly, or just plain nonexistent, these ideas may help you. I’m hopeful that they’ll at least provide some ammo for thought.

Listen to your critics.

You learn more from your harshest critic than you ever will from a room full of yes-men. It’s because of the room full of yes-men approach that we’ve had such monstrosities as the last season of Roseanne thrust upon us. If one person early on had said, “You know, that’s a fucking stupid idea,” and the higher-ups had actually listened, who knows what kind of a note the show could have ended on.

Now, the trick is figuring out what is actual criticism, and what is just trolling. If one troll just says “THIS SIM SUX LOL” then don’t put much stock into it. But when a group of once-active people disappear all at once, and one of them complains loudly? Pay attention to that. Amid all the profanity and name-calling, you will often find the words of someone who actually does (or did) want the community to succeed and has some real insight as to what’s broken.
END_OF_DOCUMENT_TOKEN_TO_BE_REPLACED