And what a relief.

The Northfarthing Faire was a great success. And now, I’m feeling it. Working two 12-hour days and getting 6 hours of sleep afterwards was much easier when I was in my 200s. Whew.

BUT! I have PICTURES! Click any of them to see bigger versions. 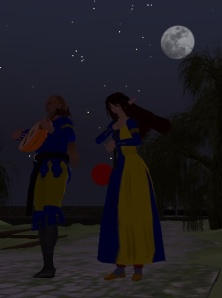 Archimides and I were up before dawn, rehearsing before the parade. Archimides had a flying carpet that he piloted while playing! The two of us and one Janos Jungsten sat in the front playing instruments (he had a drum), and the Princess rode in the back and waved to crowds as we passed by. 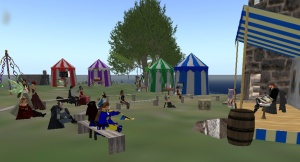 Our first performer of the day was storyteller extraordinaire, Shandon Loring. If you ever get a chance to hear him, do so. He has a charming Irish brogue and is just one of the sweetest men (or tortoises or mogwais…) you will ever meet.

Here he is up close.

OK, this one bears an explanation *blush*. I was DJing in the morning, filling in for someone who couldn’t make it, and I got on the audio stream and talked Lord DonPaul into getting in the kissing booth–figuring most of us were straight women (or at least slightly wavy) and that it would get good revenue in tips. So, to lead by example and to get the ball rolling, I put 500L in to kiss His Lordship.

Our biggest musical act of the weekend was Atheene Dodonpa, who performed at noon on Saturday. She has an astounding voice, the kind that brings tears to your eyes (in a good way!) and she plays numerous early musical instruments.

In the afternoon, Her Highness Aislinn opened up her castle to tea in the garden, followed by a tour later on. She had all kinds of fun stories and gossip to tell.

Me outside the Haunted Dungeon, posing with Dewey the Death Knight. I hid 7 prizes in various places; as far as I know only two people (working together) found all 7. Prizes included a skull belt, a silver cross necklace, a pewter skull tankard, and a spider choker necklace.

We did a little bit of belly dancing before the close of the day Saturday. Here’s Kathlyn Lewsey with her cool twirly baton (which Arch made!).

Saturday’s faire day came to a close with a fireworks show over the Princess’s castle, presented by Shandon Loring (this time in Mogwai form).

I’m so excited that we got KIDS on Sunday! To tell you the truth I don’t know if I’ve ever seen more than one child in SL before yesterday, and then I saw FIVE! The cutest was the little red-headed lass dancing a jig on the stage between shows. I nearly wept it was so adorable. 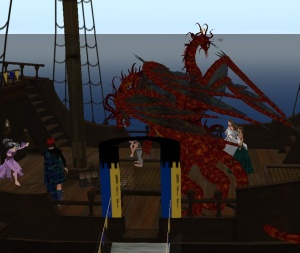 Our biggest guest (sizewise) was this three-headed dragon, on Kat’s ship during Alyra Moondancer (Marae Arizona)’s show. Alyra brought lots of friends out from Port Luskan, and I do hope they enjoyed their visit as much as I enjoyed their visiting.

Meanwhile at the joust, Latis Llewellyn and Mitzy Burns pass each other in the lists. Unfortunately, the joust ended up as just an exhibition because the scripts were just not working properly. So DonPaul declared a melee free-for-all, last one standing gets 1000L. It was won by a fellow from Avilion, whose name eludes me.

At last the night came to a close, with an even bigger fireworks display than the night before! 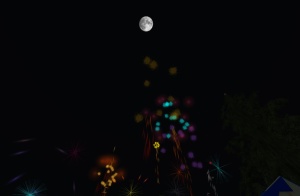 Some things I didn’t get pictures of, unfortunately. They include the sword tournament on Saturday, the horse race on Sunday, me and Arch onstage either day, Arch’s wild magic carpet tour of Tookwater on Sunday, and the cruise around the sim on Sunday.

IT'S ME. View All Posts